Today, we’re going to take a look at a very cool women’s ensemble designed and made by André Courrèges, the Parisian fashion designer, which was sold through Harrods in London in 1965. It comprises a mini-dress made of bright yellow wool with a white vinyl belt and white wool-acrylic coat. The ensemble was designed to be worn with a pair of mid-calf boots, as shown in the image above, and perhaps also a peaked or pill box hat and pair of white gloves.

The geometric shape of this A-line mini-dress is juxtaposed by the organic shape of the fake pockets and belt buckle. And, the yoke (shape around the neckline) evokes a style of children’s clothing.

Courrèges, who originally trained as a civil engineer, but was always interested in architecture and textiles from an early age, was heavily influenced by the Spanish born couturier, Cristobal Balenciaga, and in fact worked with him for 10 years. He learnt all he possibly could about cut, quality and construction and like Balenciaga, became renowned for making clothes that were perfectly proportioned.

The mini-dress, above, became a fashion statement in the 1960s. In contrast to designers preceding him, especially Dior, Courrèges dared to shorten the length of his dresses so as to elongate the legs and inject a sense of youth and modernity into women’s fashion. Around the same time, Mary Quant was also designing short skirts for women, and there is much debate as to whether it was Quant or Courrèges, who actually first invented the mini-skirt.

The construction in this Courrèges dress appears quite simple. It has been cut symmetrically; the overall shape is rigid and geometric – it has an architectural shape; there is minimal decoration; it is done up by a three-quarter zipper at the back and three eyelet hooks at the neck and the inside is fully lined with white rayon. And, on the outside, Courrèges has used topstitching along the seam lines to emphasise the cut and shape.

On the inside is the label ‘COURRÈGES / PARIS / MADE IN FRANCE’.

And, the zip is concealed by a flap of fabric.

This image is just to give you a sense of how thick and resistant the wool is. 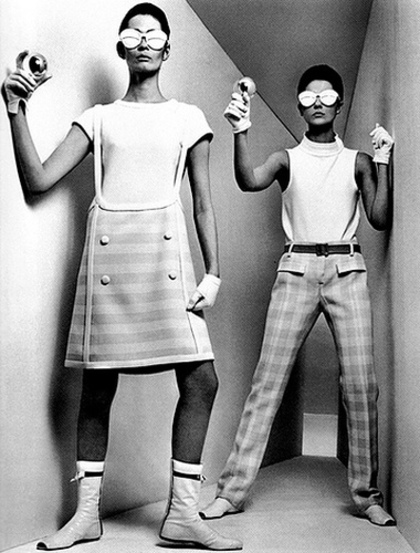 Courrèges liked bold, fresh colours – yellow, whites and off-whites, lime green and silver, and for this, as well as his stark shapes, metal bras and bustiers, goggles and helmets, his garments of the mid-late 1960s were dubbed ‘Space Age’. See a YouTube clip here: Andre Courreges ‘Space Age’ on YouTube.

The coat which accompanies this dress is heavy (since it’s made from wool) and is also fully lined in white rayon.

It is detailed with gold Courrèges buttons down the front, back and on the cuffs and also has a geometric shape.

These mid-calf ‘Go-Go’ boots, which complete the ensemble, were another trademark for Courrèges in the 60s, which he designed to go with almost all his outfits. They feature cream plastic uppers, a leather sole and heel and vinyl lining in the boot and sock.

This particular Courrèges ensemble was worn by a Sydney woman living in Europe who bought the dress at Harrods in London in 1965. In fact, she also told staff at the Museum at the time of acquisition that it was bought just after she left her husband!

I think big purchases like this often come after some kind of emotional upheaval (for better or worse) – whether starting a new job, getting engaged, breaking up with a partner, moving house and so on. But, Courrèges also designed for a mass-market, which shouldn’t be forgotten, and in the 1960s his clothing were among the most copied.

So, would you agree – lookin’ cool in Courrèges? Are/were you ever a fan of the mod look and do you think the ‘Space Ace’ look could have a comeback? Have you weighed your handbag lately?