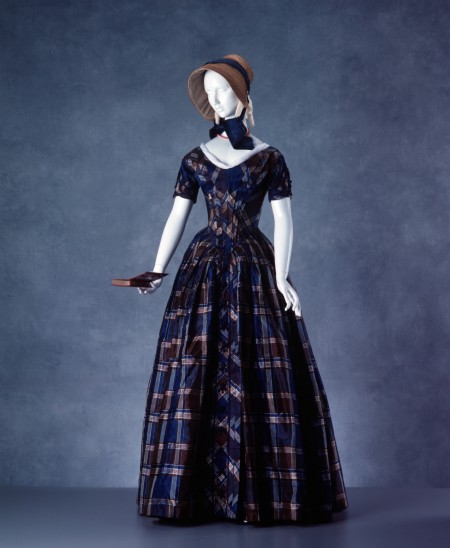 The other day I was working in the basement in the fashion and textiles section when I saw this dress from the 1840s. Silk with a check design of blue, brown and grey, it instantly reminded me of a similar skirt that’s listed on the Australian Dress Register. The skirt is from the Tongarra Museum, a small regional museum in Shellharbour, where I previously worked as a volunteer while at Uni. This skirt was owned and made by Sarah Thomas, who settled in the region from England in 1837 with her husband and family. Unfortunately, the bodice of this outfit hasn’t survived.

I didn’t actually realise how similar the skirts in these two items were until I had another look at them both. For example, down the centre front are five bias cut folded strips of fabric extending from the waist to the hem and down the central strip there are several fabric covered buttons. Also, both these skirts are made of silk taffeta and have distinctive plaid design – the Sarah Thomas skirt in purple, green, pink and green; the Powerhouse one in blue, grey and brown.

One of the main differences, however, between these skirts is the waist. The Sarah Thomas skirt has a thin waistband, softly pleated skirt, with a small section of gathered fabric at either side of the centre back opening. The Powerhouse dress, on the other hand, is gathered using organ pleats and sewn into the bodice. Organ pleating is used to gather a very wide width of fabric into a small section, which means that there is an awful lot of fabric in the Powerhouse dress. The soft pleating of the Sarah Thomas skirt demonstrates that a lot less fabric has been used in this garment.

Although the styles of these skirts are remarkably similar, the slight differences in the construction of their waists gives insight into the people who wore them. The Sarah Thomas skirt has far less fabric than the Powerhouse dress and at the seams the pattern doesn’t quite line-up. We know that Sarah was the wife of a farmer, from a working class, southern English family, was newly settled in Australia and had a large family (approximately five children by the time she wore this dress). Because of this, it is appropriate to assume that she chose to use less fabric for reasons of economy. Economy is further shown through the use of pleating around the centre back of the skirt, allowing it to be expanded and contracted during pregnancy and so it could be worn by somebody else.

You can also see how the skirt was worn with a bodice by Sarah during her pregnancies with three rows of needle holes around the waist of the skirt.

These rows which form a V at the centre front show how the skirt was worn higher or lower depending on the shape or height of the wearer. Another aspect of this skirt that intrigues me is the frugal use of different coloured threads in its construction.

The Powerhouse dress with its skilfully sewn overstitched seams, gauging, pattern matching at the seams, organ pleats and beautifully fitted lining, on the other hand, was most likely made by a professional. It uses the same colour thread throughout and doesn’t have any gathering at the back or any other quirks that would easily allow it to be made larger or smaller. Perhaps it can be assumed that this dress was owned by somebody who was wealthier in comparison to Sarah Thomas.

So…after considering these conclusions about the construction of these two skirts, I wondered, how is it that two skirts, remarkably similar are made at roughly the same time on opposite ends of the country? I thought that I might find another example on the web or in a fashion plate, but so far I haven’t found anything.

I thought that I might ask you – do you know of any other examples that are similar to these two skirts? The Bayldon Collection at the Coffs Harbour Regional Museum