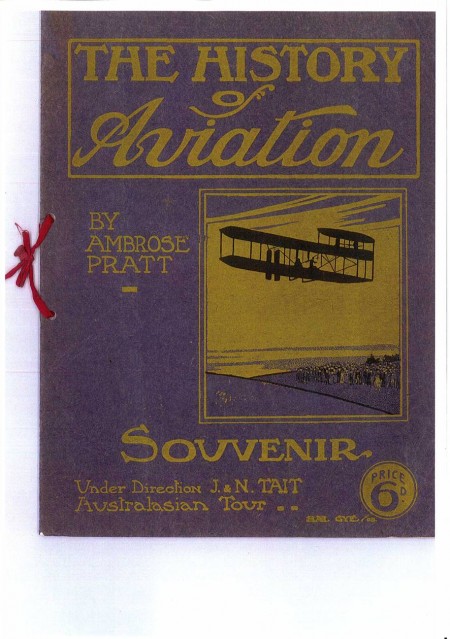 Today marks the Centenary of Colin Defries’s historic flight in his Wright Model A ‘The Stella’ at Victoria Park Racecourse on 9th December 1909. To recognise this, here is my fourth and final instalment of the saga…

Armistice in the “Aviation History Wars”

The 1988 bicentennial project of the Civil Aviation Authority, an authoritative chronology of Australian aviation history, researched and produced by two well-respected aviation historians, Neville Parnell and Trevor Boughton, was an opportunity to ‘blow away the fog’ and correct past errors, but the opportunity was lost. In their defence, the task they undertook was monumental and the work is a vital reference for researchers but, like all such works, errors will always occur. In dealing with the evidence relating to Defries, Custance and Houdini, they have tried to let the past speak for itself and the implication is that Houdini was the first to make a powered flight in Australia because the Aerial League of Australia gave Houdini a trophy and “…the flights were certified in writing by nine observers, and claimed as the first in Australia…”. There is no argument that Houdini flew the wings off Defries. Houdini had made three flights on March 18th, 1910 from 1 to 3.5 minutes duration, with a circling flight included. They were observed, photographed and filmed. Houdini was the consummate showman!

However, it has generally become acknowledged that the definition of flight established by the Gorell Committee on behalf of the Aero Club of Great Britain dictates the acceptance of a flight or its rejection. The definition of flight approved by the Gorell Committee states: “Free flight in an aeroplane occurs when the machine, having left the ground, is maintained in the air by its own power on a level or upward path for a distance beyond that over which gravity and air resistance would sustain it”. There is no requirement for lateral control or return to the point of take off. Based on this definition, is there any doubt that Defries flew?

At the moment all is quiet. However, it is expected that the ‘battle’ will flare anew as it did in England in 1958 when the supporters of Alliott Verdon-Roe took issue with the decision of the Gorell Committee and the supporters of Samuel Franklin Cody who was given the credit for the first powered flight in Great Britain. 1958 was the 50th anniversary of Cody’s and Roe’s flights. When the guns fell silent, Cody remained victorious. I expect the same for Defries.

* I am grateful to my colleague in the Aviation Historical Society of Australia (NSW), John Scott, who has researched this chapter of Australian aviation extensively and allowed me to use his work freely in talks and publications. John has published his work in “Loops and Landings”, his monthly contribution to the newsletter of the Society. I have used his battle metaphor that headed his series on the first flight controversy – “The Looming Australian Aviation History Wars” – as an entirely appropriate mechanism to contextualise the parochial feeling evoked by the controversy. Even so, I take full responsibility for all that is written above.