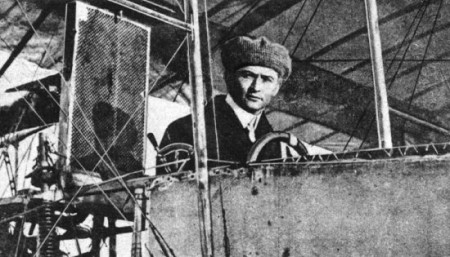 No special celebration is planned to mark the 50th anniversary of the first flight in a powered aeroplane in Australia…the experts can’t agree to whom the honour should be given for the first true flight.

It was clear to Wing Commander Harry Cobby, a First World War fighter ace, and Controller of Operations, Civil Aviation Board, when he wrote in an article in Aircraft in March of 1938 that “the first aeroplane flight in the Southern Hemisphere was made in 1909 by Mr Colin Defries, a Londoner, at Victoria Park Racecourse, Sydney, in a Wilbur Wright aeroplane”. However, subsequently this clarity became lost in historical fog. This loss was aided and abetted by George Augustine Taylor who had the task of writing the history of Australian aviation for the first edition of The Australian Encyclopedia, appearing in the mid 1920s. In his ‘history’, he made no mention of Defries preferring to give the first flight accolade to Ehrich Weiss, better known as escapologist, Harry Houdini, who had flown his French-made Voisin biplane very impressively at Diggers Rest, near Melbourne on March 18th, 1910. The reasons for Taylor’s neglect of Defries are speculative, but it is plain from the surviving evidence that the two men did not like one another and Taylor did not like the Wright brothers because he felt that they had ‘stolen’ Lawrence Hargrave’s ideas without acknowledgement. 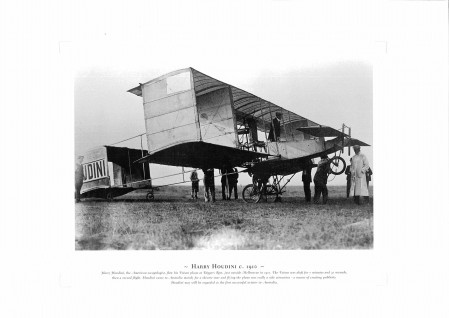 Image above: Houdini at Diggers Rest near Melbourne on March 18, 1910.

Taylor’s input into The Australian Encyclopedia remained until revised in 1965 by aviation journalist Stanley Brogden relying on his research for his book, published in 1960 titled History of Australian Aviation. Unfortunately, Brogden doesn’t specifically identify his sources of information preferring to acknowledge “…the editor and proprietors of the magazine Aircraft“. From his research, he formed the view that the first powered flight in Australia took place at Bolivar in South Australia, the aircraft was a Bleriot monoplane with Fred Custance as the pilot. The supposed flight took place on March 17th, 1910, the day before Houdini’s flight. In 1967, Brogden revised his view, coming to the opinion that Custance couldn’t be credited with the first flight because “…Custance had never flown before, that he had no proper control of his machine, and that the flight was not witnessed by any independent authority”. 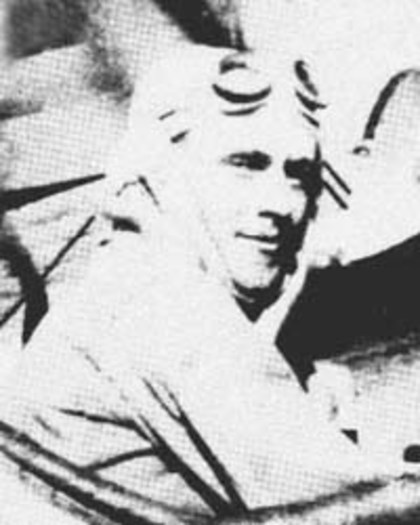 Brogden’s recantation was printed in a publication called Commercial Aviation-Around Australia Program which unfortunately did not have the wider readership of The Australian Encyclopedia. Brogden was right to reject Custance’s flight because in 1957 the Bleriot’s owner, Fred Jones, had written to his engineer, Bill Wittber, confessing that the claimed circling flight of March 17th 1910 by Custance was a “myth” to use Jones’ word and Custance’s second flight attempt was a take off followed by a crash slightly injuring Custance and damaging the Bleriot. With Jones as the uncorroborated witness, his testimony on height and distance is suspect and the inference is that Custance stalled on take off, nosediving into the ground, without travelling any great distance or demonstrating control.

Image above: Custance with his Bleriot monoplane. Image courtesy of Monash University.

The next contributor to the history of Australian aviation in The Australian Encyclopedia was Ron Gibson, first president of the Aviation Historical Society of Australia, NSW Branch, who, in 1977, supported Brogden’s original attribution to Custance at Bolivar. Earlier, in 1972, Gibson had contributed an article to the Journal of the Royal Australian Historical Society in which he acknowledged Defries’s flights, but then dismissed them as qualifying for first flight status on account of their original non-acceptance by the Aerial League of Australia, George Augustine Taylor’s creation, and secondly because “purists” reasoned that “…the pilot [Defries] did not demonstrate any ability to control and steer his craft”. These anonymous “purists” seem to have been unaware that the Wright Model A aircraft was controllable and coming into wide use in America and Europe and that Defries was a trained pilot, having been taught to fly at Cannes in France and he then added a brief flight time testing The Stella at Juvisy outside of Paris. By modern standard his flight time was minimal, but in 1909 he had enough to become an instructor! That he controlled his aircraft should not be in doubt. He took it off, maintained straight and level flight, albeit briefly, and landed safely, at least on his first flight. His crash landing on his second flight demonstrated what a momentary lack of attention could cause while flying a Wright Model A.