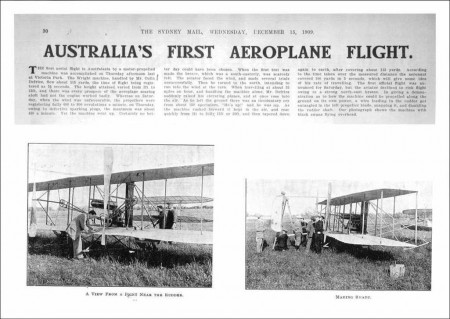 Colin Defries and the first powered flight in Australia

Just four days after George made the first free heavier-than-air flight in the glider at Narrabeen, a young Englishman, Colin Defries left the ground in a Wright Model A, that he had named The Stella after his new wife, at Victoria Park race course south of Sydney. He flew straight and level at a height of about 20 feet (6.1 metres) for a distance of 115 yards (105.2 metres) and the watching crowd of 150, according to the reporter from The Sydney Morning Herald, was thrilled.

Defries’s flight was part of a “Flying Fortnight” organised by J&N Tait. Defries was to demonstrate the new ‘art’ of flying to audiences in Sydney before moving on to other capital cities for further demonstrations. Unfortunately, things weren’t going to plan for the Taits. The “Flying Fortnight” was supposed to begin on Saturday December 4 starting at 3pm, but adverse weather conditions prevented flight that day. Instead, Defries first had the Wright towed behind a car for the spectators and then started the engine and made several fast taxi runs around the course. A collision with a pile of timber hidden in the grass damaged The Stella and stopped any further demonstrations that day. It was not until the 9th that both weather conditions and aircraft were conducive to flight and Defries succeeded. The weather deteriorated again and Defries resorted to demonstrating the Wright by ground running. Again, fate stepped in and a rudder cable became tangled in the left propeller requiring a replacement propeller and rudder repairs. It was not until the last day of the “Flying Fortnight”, Saturday December 18th that the weather allowed another flight attempt. Unfortunately, the newspapers and the crowds had, for the most part, lost interest. Determined to fly before he and The Stella had to depart for their next engagement in Melbourne, Defries was at the race course early as were about 50 spectators and a reporter. 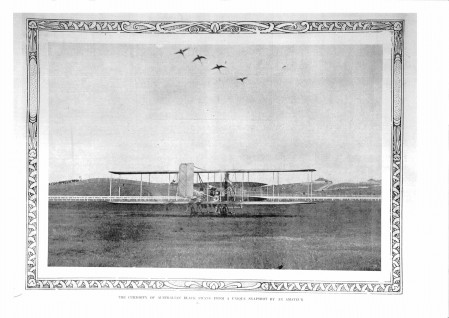 Defries’s flight was successful. According to the journalist, he achieved a distance of about 300 yards (274.3 metres) before his hat blew off and his effort to retrieve it caused The Stella to land heavily and ground loop creating significant damage. Despite the problems Defries, and the Taits, had encountered, Defries had made the first powered, controlled, sustained flight in Australia. Unfortunately for Defries, history was not going to treat him kindly.