On December 5, 1909 George Augustine Taylor became the first man in Australia to fly an untethered heavier-than-air craft. On this day he made several flights on Narrabeen beach, north of Sydney, with the longest glide reported as 110 yards (100.6 metres). George’s wife, Florence, also had a fly in the Voisin-inspired biplane glider with its Hargrave box-kite tail, although the stout gentlemen attending the glider held on to the tethers attached to the wing tips lest she fell into the ocean. Even with this attachment, her flight was recorded as 90 yards (82.3 metres) in length and she could rightly claim to be the first woman to pilot a heavier-than-air craft in Australia.

About a hundred people came to watch the aerial antics of the small group of people, friends and associates of George and Florence Taylor, as they took their turn to fly along the beach. 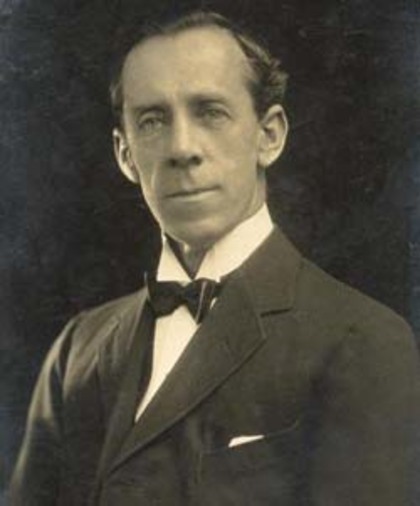 George was born in August, 1872 at his parent’s home and fruit shop in King Street, Sydney. He was the second of nine children born to George and Annie Maria Taylor. George Augustine’s younger brother, Vincent Patrick, achieved international fame as “Captain Penfold“, a balloonist. George achieved local fame in the building trade and edited a magazine called “Building”, the journal of the Master Builders Association. Taylor was also an artist, writer, publisher and inventor.

At an early age, he developed an interest in aeronautics; flying kites in the domain and eagerly following the work of Lawrence Hargrave, the pioneer of aeronautics in Australia. At the age of 10, he wrote an essay at school titled “The future of the flying machine in Australia’s history”. Later, George progressed to flying model aeroplanes powered by rubber bands. From experiments with these models he learned the basics of aeronautics.

In April 1909, George formed The Aerial League of Australia and later that year opened the first aeroplane factory in Australia at Surry Hills in Sydney. As well as construction of Hargrave box-kites, Cody war kites and the Voisin-type glider that was used for the first untethered flights, Taylor was also having his powered aeroplane constructed there.

Stay tuned for the next episode on Colin Defries and the first powered flight in Australia!