Did you know that Josiah Wedgwood was born on 12th of July 1730? It was his birthday on Sunday so we thought that this would be a good opportunity to illustrate our fabulous ‘Venus in her chariot’ vase, a highlight of our significant Wedgwood collection. This striking piece was made about 1790 at Josiah’s famous ‘Etruria’ manufactory in a district of Stoke-on–Trent, Staffordshire, England, only a few years before his death in 1795. Below is also some background information relating to the vase and our collection.

Regarded as the greatest English potter of his century, Josiah Wedgwood set up his ‘Etruria’ factory in 1759. What marked his progress towards fast-growing success was a process of ceaseless technical and stylistic experimentation. He was tireless in developing new ceramic bodies and was responsible for introducing the neoclassical style into English ceramics.

Wedgwood’s most important contribution to ceramics was jasper which he introduced in 1775. A result of more than 3000 trials in the search for a ceramic material that would best fit the new style, jasper was a dense white stoneware ideal for his decorative objects inspired by the classical art of ancient Greece and Rome. Named after the gemstone of the same name, jasper was easy to mould and decorate and could be stained by metal oxides in many colours. It was blue jasper however, that soon became synonymous with the name Wedgwood.

Although Wedgwood employed talented artists to design many of his vases, the white jasper low- relief decoration applied to this example is based on designs by the French painter Charles Le Brun (1629-90). The vase is decorated with two scenes by Le Brun: one side features ‘Venus in her chariot drawn by swans’ 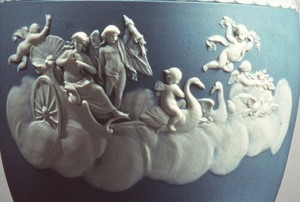 while the other shows ‘Cupids watering the swans’. 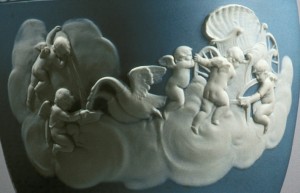 Venus, the Roman goddess identified with the Greek Aphrodite, the goddess of love and fertility, was the subject of Wedgwood’s many figures and decorative reliefs applied to his vases and panels.

Wedgwood’s links with Australia go back to 1789 when Governor Arthur Phillip sent clay from Sydney Cove to the eminent English botanist Sir Joseph Banks who gave the clay to his friend Josiah Wedgwood. As a result, a special Sydney Cove Medallion was made from that sample of raw material. In the 19th century, Wedgwood products were displayed at the Sydney and Melbourne international exhibitions of 1879 and 1881 and also spectacular table services were produced with Australian wild flowers decorations.

The Museum has collected tableware and other objects designed and made at Wedgwood from 1890 – the first Wedgwood objects were acquired only ten years after the Museum was founded in 1880. When in 1988, the century-old collection of the Museum of Applied Arts and Sciences was re-sited at the new Powerhouse Museum, it’s already substantial holdings of Wedgwood ceramics were enriched with many important 18th century objects. This vase was acquired with funds donated by the Powerhouse Members Organisation in 1990. You can see it on display, among our other selected Wedgwood treasures, in ‘Inspired!’, the long-term decorative arts and design exhibition on level 3.