The Powerhouse acknowledges the Traditional Custodians of the ancestral homelands upon which our museums are situated. We respect their Elders, past, present and future and recognise their continuous connection to Country.
Tim Ross, comedian and curator of Design Nation.
Share: Email this

Design Nation, curated in collaboration with Tim Ross, brings together outstanding examples of Australian ingenuity and innovation from the MAAS Collection. Many of these objects are mainstays in Aussie households — the Dolphin torch, Staysharp knife and Esky — yet we tend to take them for granted.

Through an exhibition and series of audio interviews and recordings, Tim invites us to rediscover these ubiquitous, everyday objects of Australian design as he reveals previously untold stories and design narratives to show how our unique design histories have helped shape our national identity.

Tim Ross is a comedian, writer, broadcaster, television presenter and self-proclaimed design nerd. His live show Man About the House is performed in architecturally significant houses across Australia, including houses designed by Robin Boyd, Harry Seidler and Roy Grounds. In 2016 his award-winning two-part ABC documentary series Streets of Your Town surveyed design from the Australian suburbs.

Design Nation is presented in collaboration with Tim Ross as part of Sydney Design Festival 2018. 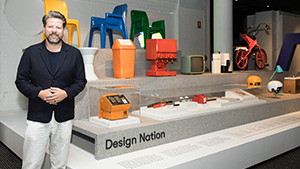