An Australian rabbiter making a living from pests

The release of rabbits into the Victorian bush in 1859 was an environmental disaster. The 24 animals multiplied to plague numbers that are still with us today. Rabbits affect biodiversity and cause soil erosion by tunnelling into the ground and nibbling plants to the roots.

Trapping provided food and income for many people until it was banned in NSW in 1980. Today it is considered more humane, efficient and effective to control rabbits by destroying burrows, building fences and using viruses such as myxoma and calici.

Snow used to fall reliably on the alps of the Great Dividing Range. It melted in spring to feed rivers flowing to both the east and west. The alpine climate suited many species of plants and animals that are now under stress as the climate warms.

In 2001 CSIRO scientists estimated that, due to the greenhouse effect, daily temperatures in south-eastern Australia could increase up to six degrees by 2070.

That spells doom, not only for snow-sport industries, but also for many of the plant and animal species that thrive only in cool temperatures.

A blackbutt forest on the Comboyne Plateau

Before 1900 the Comboyne Plateau in northern NSW was covered with dense subtropical rainforest. European settlers cleared most of the trees to create grazing and dairy farms, so only a few pockets of remnant rainforest remain today.

The area lies between the Manning and Hastings River valleys, has deep rich basalt soils, and receives relatively high rainfall. These attributes make the Comboyne Plateau a valuable farming area.

Avocados, macadamias, blueberries and other fruits now stand where once the blackbutt trees grew.

Farmers and drovers took sheep and cattle to graze in the high country every summer from 1830 to 1969.

Kosciusco State Park (now Kosciuszko National Park) was established in 1944 and grazing stopped completely in 1969. The focus then turned to tourism and preservation of biodiversity.

Cattle love to spend time in and around rivers but their hard hooves create compacted stock tracks and churn up soft soil. This makes river banks susceptible to erosion and increases sediment in the water.

The animals can also overgraze the area, leading to the loss of habitat and of local biodiversity. Their manure and urine increases phosphorus in the water, changing in-stream habitats.

Fencing river banks is very expensive but it is often the only way to protect the riverine environment. 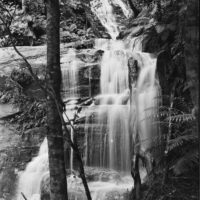 The beauty of the Blue Mountains forests has attracted bushwalkers and tourists since the 1890s.

With other naturalists, Myles Dunphy explored, mapped and negotiated for 30 years to get the Blue Mountains National Park established in 1959. The Greater Blue Mountains Area was declared a World Heritage site in 2000.

Its sandstone plateaus have deep crevices, which have their own microclimates. During climatic changes in the past, animals and plants found refuge in these crevices when conditions in other areas became unsuitable.